Defensible space is a more commonly used term as August fires have become a part of life in the intermountain west.  Right now in Utah, there are 5 wildfires burning according to Utah Fire Info. This website has become a great resource for reporting, tracking and monitoring fires in Utah.  Nationally, 110 large fires have burned over 1.9 million acres. Six new large fires were reported in Idaho, Nevada and Oregon. Eight large fires were contained including the Ferguso Fire in California. The Mendocino fire in CA alone has burned 400,000 acres.  Locally in Utah, we’ve seen fires in both Summit County and Wasatch County.
Many communities have fire restrictions in place such as no open flames, no fireworks and no campfires.  To look up what’s restricted in your area, visit this site.  As a homeowner, you could be putting yourself and your neighbors at risk by not abiding by these restrictions when they are in place. Remember, they are put in place for your own safety. You don’t want to be the reason behind a large fire in your own backyard!
Some fires are on Bureau of Land Management land and others threaten homes.  As a homeowner, you can take action to prepare your house and property to best survive a wildfire.  Having defensible space around your house is something every homeowner should be aware of and actively engaged in.
—

Article below courtesy of  Nick Gromicko and Kenton Shepard

The size requirements for defensible space vary by jurisdiction because the potential for wildfires varies by region. Buildings in forested areas of the Southwest need a much larger protective space than in New Jersey, for instance. As of 2006, California state law mandates a minimum of 100 feet of defensible space for houses in rural locations. Trees and shrubs surrounding a house should be trimmed and spaced apart a safe distance from one another. Chainsaws can be used to remove trees and branches, pruning shears to trim plants, and rakes for removing pine needles and other ground-level combustibles. Trees that are very close to the house should be removed because this is where fire-prevention is most critical. Vegetation can be plentiful towards the perimeter of the space if it is green and pruned. 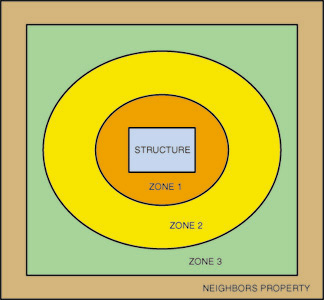 Zone 1:  The first 15 feet from a home should be devoid of all flammable vegetation. Firewood and other flammable materials should not be stored in this region.

Zone 2:  This area of fuel reduction should extend from Zone 1 outward to between 75 to 125 feet from the structure. Trees and large shrubs should be no less than 10 feet apart, especially in steep terrain. Trees must also be pruned to a height of 10 feet from the ground, and any “ladder fuels” (vegetation with vertical continuity) removed from the base of the trees. Grass, trees and shrubs in this region should be green and adequately spaced. Pine needles, dead leaves, branches, dead or dying vegetation and other flammable debris on the ground should be removed whenever they appear.

Zone 3:  This region of traditional forest management is of no particular size, although it normally extends to the property limits. More trees are permitted here than in Zone 2, although their health and vigor should be maintained.

Additional tips:
In summary, buildings can be spared from wildfire damage through the removal of surrounding flammable vegetation. Defensible spaces are critical in hot, dry, forested regions, although their presence is recommended everywhere. 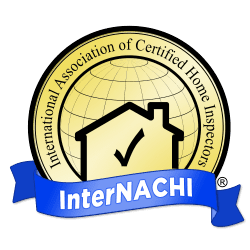